Um, nothing to see here.

I'm not sure how to gauge your expectations for what you read here, but if I were you I would keep the bar low today.

I have been preoccupied recently with Butter by Nadia dresses. Anyone know anything about this? There's a skirt and loads of stretchy fabric you wrap around yourself. I think this was kind of a thing in the early 90s, this 'one garment a dozen ways' idea. I bought a skirt/dress in Kensington Church Street in 1992 which was basically a long tube and bless me if I didn't look amazing in it for the five minutes of my life when I had a great figure, but it was essentially a stretchy hobble and I couldn't walk more than a couple of inches per step. I'm sure I bought some elaborately wrapped thing there as well. Folly of youth, etc.

I'm entering my yearly holiday packing hysteria period and I have a fantasy where I pack a single dress plus three or four pairs of shoes and toiletries and off I go. It seemed like maybe this could be that dress. If I had the income, inclination and bottle to spend more money, I'd be really interested in this (which isn't a dress, but you know what I mean). So obsessed am I with these garments that I trundled down to Clapham and had a look in the flesh. (The Clapham stereotype isn't a patch on the reality. I couldn't move for buggies - single, double, triple, what have you. I have never seen so many babies in my life.)  So now the dream has died. I couldn't love these dresses in real life. They were kind of, um, cheap. And I can't get past is that you are wearing a big long scarf all twisted up around you and one false move and it could all unravel. So the dream is gone and I still have to pack.

I continue to drag my arse if anyone's interested. I'm in good spirits and everything, just swimming through treacle.

The last time I felt like this, I went on a special diet from the herbalist - yes, I am that woman - and it really did me good, but I've got a bit lazy. I need to kick that back into gear.

I have my share of skepticism regarding Chinese medicine and acupuncture, but when I feel low I tend to hibernate and avoid doing anything practical or positive, which I'm pretty sure is even less effective than the results of the most critical studies of herbal medicine. I have at times resorted to stuff which I had no faith in - EFT, CBT, massage, light therapy, homeopathy - just to get the process, a process, any process, underway. And it isn't a bad approach. If I had relied on my own dubious methods (junk food, credit cards, ill-advised alcoholic liasons), I'd probably be dead. In any case, I wouldn't be better.

(If it means anything, six months on that diet improved my thyroid results, and that was a test done by my GP. So, you know. Not exactly empirical evidence, but it'll do for me.)

All that is just a vague explanation/excuse for another monumentally lazy post today. It helps if you have an interest in cooking. If you don't, here's a photo of the garden furniture we scored at the auction a couple of weeks ago. (Because that's far more enticing. And I sent it to my mum yesterday, so it's on my desktop. You're welcome.) 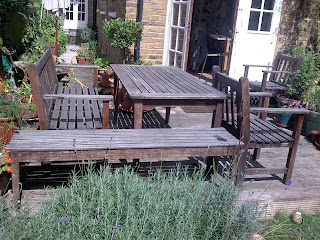 And maybe, even if you don't like cooking, you will feast your eyes on this beauty. I am making lots of bread lately. I fear I may be obsessing a little. I don't think my thyroid likes it. I should knock it on the head.
(I have one on the go now. Shush, you.) 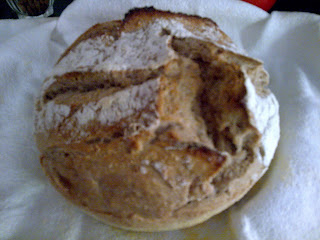 Anyway, if you do enjoy cooking I implore you to make this straight away. Homemade bouillon - what a heroic idea! Heidi Swanson has posted this amazing recipe on her lovely blog 101 Cookbooks, but it was inspired by Pam Corbin, who wrote The River Cottage Preserves Handbook.

If you ever make soups, stews, roasts or gravy, this stuff will change your life. It's not what you think it is. It's much much more than the sum of its parts, and so much more than bouillon. It adds a whole layer of extra flavour and an incredible savoury silkiness to anything gravylike. Yes, there's salt, but it isn't the salt that makes the magic. I don't know how it does what it does really, but it's amazing stuff.

I made it originally to use up some scraps of veg and herbs. We had pots and pots of overgrown woody parsley running amok in the garden, and some tough stems off the top of fennel bulbs. What I'm saying is that I made this from offcuts and stuff that would otherwise have gone to waste, and it is culinary flipping gold.

I more or less halved the recipe, and also reduced the salt by, erm, a bit. Which means I don't remember. I reduced it by maybe a third. I used sea salt, because I'm kind of a sea salt nerd, and I couldn't bring myself to use it all. It worked out fine, and I had one of the jars of bouillon in the fridge for a month or so with no mould or other ill effects. The other is in the freezer, and it isn't frozen solid, so I guess it's okay too.

I used leeks, celery, carrot, garlic, fennel, parsley and coriander, plus salt. Oh, and I didn't have sun-dried tomatoes, shallots or celeriac, so I didn't use them.

Also, a teaspoonful is great on avocado on toast with a squeeze of lemon. Don't say I never give you anything.
Posted by puncturedbicycle at 21:41