How bad is this exactly? 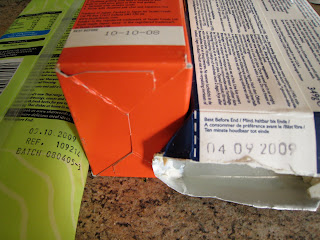 I read Angry Chicken pretty regularly, and this post hit me squarely in the lunch part of my brain, so I hastily assembled the last three or four items left in our cupboard from before our holiday (yes, I know that was almost a month ago and I am supposed to be at the supermarket right now) to try it out. As I chopped up the tofu, I noticed the date on the packet, which was not really anywhere near any recent date ...on any recent calendar. I checked out the jar of tom yum paste (added for extra flavour) and that too was, well, I'll just call it old and draw a veil. Noodles - ditto. The miso paste may have moved house with me; I have lived here for almost two years. The combined age of these items beyond their expiry, were they added up and translated into human years, would be almost old enough to ride their bicycles to school without adult supervision.

So: soup in bowl, ready to eat, all ingredients well beyond their sell-by dates except for the greens, which came straight from the garden. (Surely that counts for something.)

Reader, I ate it. I considered googling the killer potential of each dodgy ingredient, felt too hungry, and started to feel the germ of a challenge making itself felt. I don't think I will die, but maybe the shrimps in the tom yum paste will give me the swollen face syndrome again.

And it was fine, if not quite as intensely savoury and delicious as I had hoped. (Considering the ingredients, my expectations may have been too high.) I am going through a reluctant junk food phase in that I am both too tired to cook and I can't seem to make anything sufficiently stimulating to really want to cook. This is in the wake of last Friday night, which resulted in both a crushing hangover and post-drunk humiliation (not enough recall to really understand what happened but just enough to know I said some stupid stuff to people I was trying to make new friends with and now I am just trying to not think about it too much until sufficient time has passed for me to stop cringing and groaning). Saturday was inevitably a junk food day, to soothe the stomach and the psyche. Sunday I couldn't get away from the junk food, and Monday I was still in the grips of some kind of post-something syndrome, because my need for salty and savoury was great. Pizza seemed like just the thing

I know Time Out has just named this place the best in London and in the wake of that review they are struggling to keep up, but really, I'm not sure it's as good as this place. Plus, there was a strange kind of odd vibe, like there was a timetable for the next round of pizzas, and I arrived maybe five minutes later than the prescribed 7:15 pizza collection time and was told off for being late for my order, as in "If it isn't good, don't blame us." I thought, if it is cold I won't blame you, but if it isn't good, I will probably go back to my old place where they don't give you a five minute quality window. So my experience was coloured by that.

My experience was also altered somewhat by the face that I was apparently developing a cold sore, which, pardon me but what the fuck?, I have never ever ever experienced in all of 42 years. Certainly in that time, I have been not infrequently tired and run-down, and from time to time I have been sleep-deprived, jetlagged and hungover. So, and I'm sorry to repeat myself here, but what the fuck? It started with sore little cracks at the side of my mouth, like when you eat too many oranges or if you have a bug and get dehydrated. I thought that was what it was (hello hangover!), and one side began to feel like it had a shard of broken glass stuck in it, and when I looked closely in the mirror, I could see the little blisters. It is swollen like a motherfucker too, still. I keep slathering it with ChapStik and vitamin e and flipping Germolene because I have somehow managed to have the only household in Christendom without a tub of Vaseline. And I have washed my hands every five minutes since it started. Did you know you can get cold sores on your fingertips? (You're welcome. I like to spread the joy.)

And in other news, I just ate some of an old Easter bunny and now I do in fact feel a little queasy.