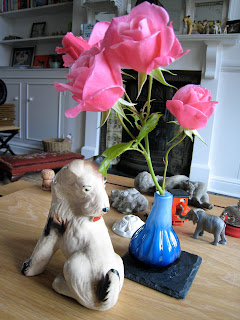 What an uncharacteristically lovely weekend I have had! Minimal drama, guilt, cringing or associated neurotic tics. It was a little like one of those dreams where nothing really happens - maybe you're drinking a cup of tea in the sunny garden, a friend rings the doorbell and you have a pleasant chat, then you eat some cake and admire your new earrings - but it's suffused with a hazy mist of wellbeing and contentment. And then you wake up and more likely than not it's a sharp-focus rainy Monday morning in January with added toe stubbing and toothpaste dribble stains.


But instead of unpleasantness, I awoke this morning next to the smiling lovely man and endured my minor hangover whilst dosing myself sensibly with much sweet tea. Then I augmented my nightwear with bra, socks, trainers and cardi - Instant daywear! I am nothing if not efficent! - and chatted with my neighbour whilst cutting roses in the garden, and breakfasted on delectable Moroccan flatbread filled with mushrooms, harissa and soft, sweet, browned onions. Monday mornings usually find me hibernating furtively and pretending not to peek out the windows with suspicion and hostility at passers by. I think I am leading someone else's life. Nigella Lawson's? Felicity Kendall's?
On Friday the lovely man was able to work from home, which was nice as I normally only get to communicate with him via text and for the five minutes between his dinner and bedtime. Friday night we met AC and headed over to the local church for their open mic night - was ever a more suburban phrase uttered? - but they had managed to cancel it and not tell anyone, so we went to the pub instead and enjoyed the full Chas 'n' Dave experience of one of their live music nights. I love this place with all my heart. It's a proper old fashioned pub with old blokes and dogs and people doing crosswords with their coats on or playing pool and everyone uneventfully enjoying good beer (including my beloved Chiswick bitter)*. Also, I finally got to hear the story of the BT date which never was. Consensus says he's married.

Saturday morning is my very favourite time of the week, even considering that John Peel is dead and there is no more Home Truths and this weekly vacuum reminds us that we are all headed for the grave. We awoke to Saturday Live, which I don't really listen to with my brain, just my ears. Fi Glover used to do the GLR morning show, so it is a warm enough experience.** Great quantities of tea were consumed and there were buckwheat pancakes. 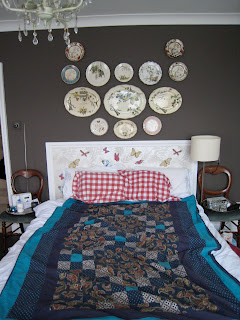 The fact that we see so little of each other often means our weekends are given over to Planning and Execution of Important Tasks. So much more enjoyable to spend the day doing little, planning little and wasting time while still accomplishing stuff by stealthy means. Featured were:
- trying on, sorting out and photographing an enormous quantity of vintage clothing for later eBay/Etsy listing.
- walking the dogs down to the funny shop near Kew Bridge which sells military clothing and filing cabinets and nothing else.
- homemade fish curry and dhal and grilled asparagus.
- mounting old plates on our bedroom wall (wonky photo above, with curiously bent-looking ceiling).
- The Sopranos.

On Sunday morning, after copious quantities of tea and Broadcasting House, a surprise decision was taken to eat breakfast at the farmer's market. We went to the auction and looked at all the weird and wonderful detritus there. Then we got on a train to Waterloo and had a quick bite and a bottle of wine before seeing Elvis Costello in concert, which I loved until I was reminded that he is a bitter misogynist*** but by then my bladder was full to bursting so I had to leave anyway.

What you have just endured may be the most tedious weblog entry ever in history, and I know this and somehow don't mind.


* Now overshadowed by the more well-known London Pride, which is more alcoholic, stronger in flavour and harder to cock up.
** None of this will mean anything to most people, but suffice it to say that in the late 90s there was a moment of Radio Nirvana and eventually it ended but life went on. If you understand the concept of Radio Nirvana, yours is probably different.
*** Also - musician with monstrous ego shock horror etc. He sort of did a big arms-in-the-air after each song, which he performed alone onstage until Richard Thompson joined him for some Claptonesque guitar noodling. I found this tiresome. Perhaps I have returned to form.
Posted by puncturedbicycle at 14:29